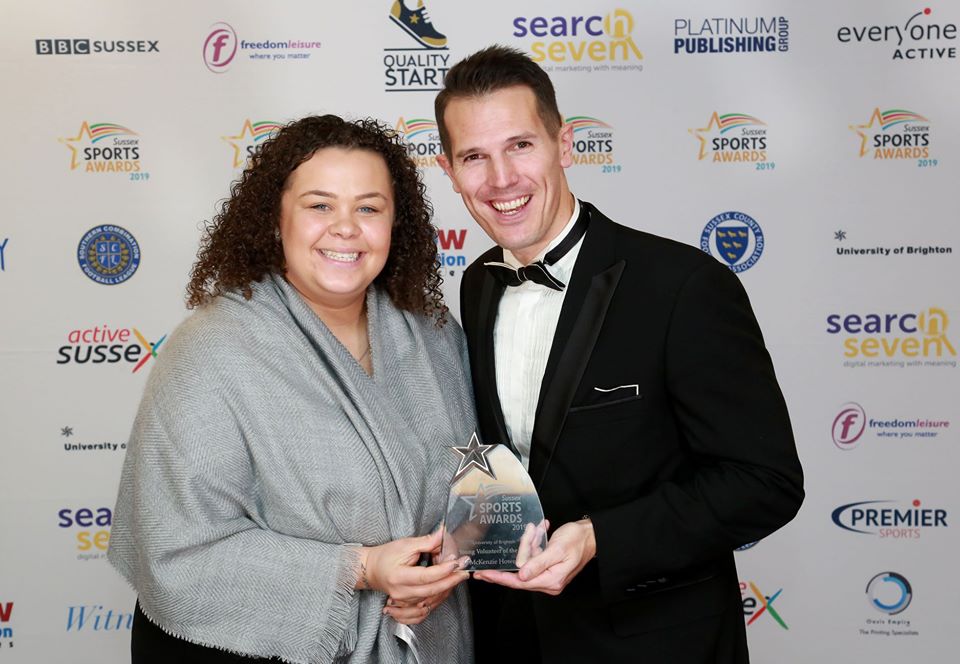 McKenzie Howell won the Young Volunteer of the Year award at the Sussex Sports Awards on Friday 22nd November. The annual event organised by Active Sussex celebrates all things sport in the county. This year's awards included an appearance from guest host Kriss Akabusi. McKenzie received her award from the University of Brighton's new Head of Sport Barry Squires (pictured above) who presented the Young Volunteer of the Year award category.

McKenzie was recognised for being an active member of the University of Brighton Netball Club. Mckenzie not only volunteers for the Eastbourne based netball club but also successfully gained the volunteer position of University Student Netball Officer on behalf of England Netball. Mckenzie has to date accrued over 100 hours of voluntary time this last year by; supporting 2 weekly social Netball sessions, to allow the wider student population to participate in the sport, event delivery, club administration and Kit Officer, with the figure still increasing.

Another winner of the night with Brighton connections was in the Sussex County FA Volunteer of the Year category.  Ricky Perrin won this award and has done an incredible amount of work promoting and running Wheelchair Basketball and runs sessions at the University of Brighton campuses.

Also in attendance were representatives from the men's rugby team who were shortlisted nominees in the Team of the Year category. Worthing College Under 19 Netball Team won this category.

Below are the representatives, students and staff, that attended the event.